To the south of Bali in Badung Regency lies Uluwatu, a village which is quite small to be compared to other villages in Bali. Many people also use it to refer to the area south of Jimbaran. The entire area is also called the Bukit Peninsula or just The Bukit. Normally it's a 30 minutes drive from Kuta and a taxi ride from Kuta will cost about Rp 50,000 one-way. If you are just visiting for the day, consider asking the driver to wait for you for the trip back, as it can be difficult to find transport out of Uluwatu. 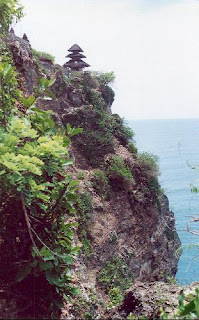 However to the majority of travellers to Uluwatu, "Uluwatu" refers to the beautifully well-known Hindu Temple - Puru Luhur Uluwatu which is perched on the cliff banks at the edge of a plateau 250 feet above the waves of the Indian Ocean. It belongs to the Sad Kahyangan Temple group in Bali, which means - six big groups of Bali Temples. To be exact, it is located in Pecatu Village, a sub-district of Southern Kuta which is about 25km to the south of Denpasar. Pura Luhur Uluwatu is surrounded by a small forest which is normally called Alas Kekeran, a forest that is actually a part of the temple itself and home to the well-known Uluwatu monkeys. The temple is blessed with the breathtaking view of the Indian Ocean with beautiful sunsets..


On the right and left of the temple building or Pelinggih Ida Bagus Ratu Jurit is located in the main complex of Uluwatu Temple, there are two stone mangers that look like a boat. When both of them are combined into one, they bear similarities to sarcophagus, the famous stone from megalithic era culture. There used to be an archaeology site/mission in the 16th centuries in the winged entrance gate. The "winged entrance gate" is one of the rare leftovers artifacts from archaeology works done there. This artifact which still exists in Uluwatu Temple can be compared with the same one located in the Mosque Of Sendangduwur Village, Lamongan, East Java. 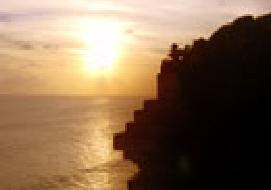 m evil spirits of the South-West, where major deities is believed to dwell in. In Uluwatu's case; it is Bhatara Rudra, God of the elements and of cosmic force majeures. Dedicated to the spirits of the sea, the famous Pura Luhur Uluwatu temple is an architectural wonder in black coral rock, beautifully designed with spectacular views. Most of Bali's regencies have Pura Luhur, "which means high temples or ascension temples" which became the focus for massive pilgrimages for 3-5 days "Odalan anniversaries". The photogenic Tanah Lot and the Bat Cave temple or "Goa Lawah" is also a famous Pura Luhur. Not all of the Pura Luhur are on the coasts or on the clifs like Pura Luhur Uluwatu, however they all have awe-inspiring locations, overlooking large bodies of water.

Pura Luhur Uluwatu Temple is located on the cliff top close to the famous surf break on the SW of the Bukit peninsula. Empu Kuturan- a Javanese and Hindu priest who built the tiered-meru, founded the temple in the tenth century and a shrine here as well. He also built in other key locations along the Balinese coast. In the 15th Century the great priest Dhang Hyang Dwijendra, who started the present form of "Hindu Dharma" religion, chose Pura Uluwatu as his last earthly abode: history records that Dwijendra achieved moksa (oneness with the godhead, in a flash of blazing light) while meditating at Uluwatu. The temple is regarded, by Brahman's island wide, as his holy 'tomb'. Legend also tells us that Dwijendra was the architect of the beautiful temple, as well as many other major temples on 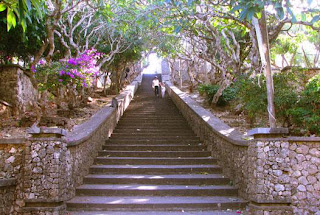 Bali, Sumbawa and Lombok. In the seventeenth century, Niratha also from the Java came to Bali and built temples, adding more to Uluwatu.

Behind the main pagoda of Pura Uluwatu's small inner sanctum, a limestone statue of a Brahman priest surveys the Indian Ocean-it is said that the statue represent, Dwijendra. Another shrine within the complex is used to explain the boat on which Dwijendra traveled from, "Hindu Java". According to legend he arrived at Pura Peti Tenget to the north of Kuta. 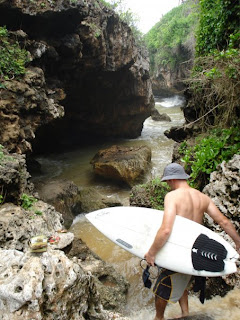 Uluwatu Beach is also well-known for its favourable surfing conditions and full moon rave parties. The raves extend into the temple too but in a better an orderly way :) Hehe.. Thanks to the Sultanate house of Puri Agung Jero Kuta, a generation who are the temple's hereditary "Pangemong" - custodians. Hundreds of "royalty" from this family, and most "devotees" or "Pengayah" and the village's "Pemangku Priests" from nearby areas always ensure that during every seven months (on Anggar Kasih Medangsya by the Wuku Calendar, to be exact) the festival is run efficiently, and most elegantly. Puri Agung Jero Kuta's royal palace is always proud of their ancestral role and they always manage the awesome logistics with equal fitting dignity. 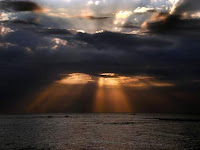 popular and beautiful surfing spot for the experienced, Uluwatu also offers a wonderful spot to view the spectacular sunset. Small restos or "Warungs" are perched on the cliff that offer a comfortable place to survey the Indian Ocean beyond the 100 meter-high cliff with beautiful sights on three sides of the cliff. Monkeys always inhabit the temple and cliffs face trying their luck at a banana or peanuts from the tourists.

There are few Bali Hotels in Uluwatu if you wanna stay a night or two in Uluwatu.. Do visit Bali Beach Hotel for the hotel reviews in Uluwatu.. Here's a little video i shot too while in Uluwatu :)

I & my two friends are planning to visit Bali in this summer vocations. we also have get an accommodation in a hostel from Hank Freid as we can not afford the luxury room. Can any one share with us its different fascinating spots

Near from Pura Luhur Ulawatu temple you can see The Bulgari Resorts & Hotels, Bali, a secluded all villa Cliffside retreat, located on the southern tip of the Jimbaran Peninsula, close to the Temple of Uluwatu; an exclusive and intimate setting for guests seeking the ultimate in privacy and luxury. If you want to see full informationabout this hotel you can visit Marcelous Hotels

Your blog's posts are very awesome, i enjoyed the posts of your Blog while reading,Thanks for sharing such a wonderful blog..
Dublin Hotel says:
“Interesting post, we shall be following your blog more closely in future! Best Wishes from Our Team ”

Now it is not a big deal to find good hotel any where in UK.Every one can visit the following Business Directory for a complete list of hotels in UK.