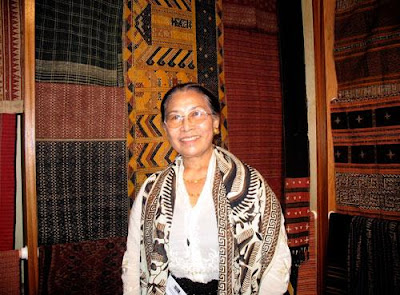 Ibu Murni (Ni Wayan Murni) is a revered living legend in Bali, particularly in Ubud itself. She can also be considered the pioneer of tourism and restaurants in Bali. All the tour guides and travel agents in Bali will definitely know Ibu Murni is. She is the founder of Murni's Villas, Murni's Houses, Murni’s Warung and Kunang-Kunang shops. She is also the pride of Bali who inspires and motivates many Balinese ladies, including myself. I've always looked up to her and wanted to be like her. She shows no sign of retirement despite her age and success. Adapting to the modern society while sticking to her Balinese roots. She is the real quintessence of hard-working and successful Balinese ladies.

She grew up in a broken family and had a difficult childhood, filled with hardships and sufferings. Her parents divorced when she was seven years old and she was send to live with her aunt. Living in her auntie's house, she was made to wake up at 2 am to prepare cakes and sell them door-to-door in Denpasar. The money made was for her monocratic aunt who gave her only 5 ruppiah if she manage to sell all the cakes. After she complement elementary school at the age of 12, she went back and lived with her mom in Ubud. Her mom was then selling and doing business in Ubud Market. She worked with her mom in the market for 2 - 3 years, before she started her first business in 1961, cycling to and fro Sanur to sell batik to the tourists. From there, she started to love batiks, textiles and basically Balinese arts and crafts.

Her major turning point was in 1974 when she bought a land in Ubud and started Murni's Warung. Clothes, batiks and paintings was her business before she married an American and learnt more about business and the American culture. Then life and business started to improve when she realised that by selling Western food, more business and tourists will come by.

From a very tiny business called Murni's Warung, with no electricity or appliace, she had moved on to greater success with hotels such as Murni's Villas and Murni's Houses. The hard-working Ibu Murni has moved on to become one of Bali's most successful entrepreneurs with hotels, restaurants, shops and exhibitions in other countries. However that didn't changed her. She has never forgotten her Balinese roots and she is one of the kindest people I know in Bali. She is full of laughter, hospitality and motivations. She is still the same Ibu Murni before she became rich and famous. Many Indonesians who have achieved success and became prosperous have mostly become arrogant and egocentric too. However, Ni Wayan Murni is one of the rare exceptions and I really admire her and regard her as my idol.


To know more about Ibu Murni, do visit her website - Murnis | murnis.com

nice write up on Ni wayan murni! very detail and true. i love her