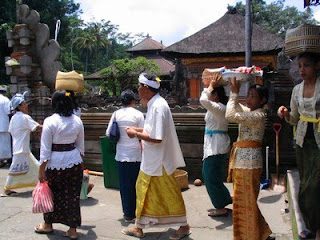 Of all the aspects of Hinduism, caste is the least understood and the most execrated. The caste system of India, with its well-known outcasts, the untouchable, is often compared in the popular imagination of the Westerners to political systems of discrimination, like apartheids in South Africa, or "Jim Crow" of the United States. A Westerner finds the rigidity of caste, and the cruelty of untouched ability, to be by definition unjust. But caste is not a government policy; it is a complex system of social organization historically based on social function - smith, farmer, priest, etc. -, which eventually became entwined with Hindu doctrine.

The word "caste," as applied to the ordering of Hindu society, comes from the Portuguese, who upon arriving in India in 1498 used the word casta, "division," to refer to the stratification of Indian society. But caste is not the same as class or station, or "division" in a Western society. It is the manifestation on an individual level of an elaborate web of cultural organization in Hindu society wherein balance and propriety are privileged concepts. Caste is a "social codification" of dharma. Caste lays outsides, or perhaps deeper than, political organization by governments. Both the Indian and the Indonesian governments have "banned" discrimination by caste. But in India, and in Bali, caste is too ingrained to disappear by edict.

Away from the office or schools, caste in Bali is still quite important. "Where do you stay?" in order not to offend and better way of asking, "What clan are you from and what's your caste?" is the first question a Balinese will ask nornally upon meeting a Balinese stranger. Caste prerogatives are maintained, in address and codes of deference, and individuals associate more freely and often with those of their own caste than with others. Although there are those in Bali who would seek to reform the system, for the most part the Balinese accept the social organization of caste. In a sense, caste in Bali can be understood as something like the Renaissance system of patronage. There is a dual obligation between members of lower and upper castes. Most Sudra - the lowest caste - families have one or more related Brahmana families to whom they turn in the case of special need, usually of a religious nature. The lower caste people are said to be the sisya, pupils, or disciples, of their upper caste surya, literally "sun" meaning patron. It is the obligation of the surya family to help, just as it is the obligation of the lower caste family to defer and offer a token, food and offerings, for the service. There is obvious gratitude on the pat of the Sudra family and obvious satisfaction on the part of their surya - they have been able to fulfill their duty as Brahmana.

I guess it's been quite a long article so I'll make a 2nd part to this article maybe later on at night or tomorrow :) In the meantime you can actually visit Bali Hotels | BaliHotels-BaliBeachHotel.Blogspot.com to read UNBIASED Reviews on the hotels in bali and recommendations on which bali hotel you should choose for a great value for your $$$ :)